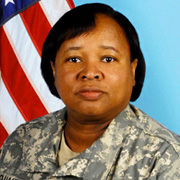 COL Stephanie Dawson served as the Deputy Commander of the 53rd Troop (General Officer) Command, one of two major commands within the New York Army National Guard prior to her retirement in July 2012. Previously COL Dawson served as the Commander of the 369th Sustainment Brigade, often called the most challenging major command in the state, a position that she held from October 2008 to April 2011. COL Dawson was the first female to serve as a brigade commander in the New York Army National Guard. As Brigade Commander, she provided command and control of assigned battalions, including the 369th Special Troops Battalion, 101 Expeditionary Signal Battalion, 56th Personnel Services Battalion and 104th Military Police Battalion. Previously she was the commander of the 27th Rear Area Operations Center during its deployment in support of Operation Enduring Freedom/Iraqi Freedom from 2003 to 2004.

As a civilian, COL Dawson is currently the Acting Chief Operating Officer at the Port Authority of New York & New Jersey. COL Dawson recently completed service on the NYC Veteran’s Advisory Board, is the National President of the National Association of Black Military Women, and is a life member of the Veterans of Foreign Wars, 369th Historical Society, and 369th Veterans Association.