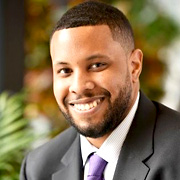 Mr. Tyndale attended Rutgers University School of Engineering and graduated in 2004 with a Bachelor of Science degree in Chemical Engineering (highest honors). In addition, he obtained a minor in Political Science. Mr. Tyndale received his Juris Doctor degree from the George Washington University Law School in 2007. During his law school years, Mr. Tyndale completed legal internships with Johnson & Johnson, the U.S. Department of Justice, and the U.S. Patent and Trademark Office. Mr. Tyndale joined a New York City intellectual property law firm in 2007, where his practice focused on complex patent litigation in the chemical and pharmaceutical arts. He joined PSEG in 2012 as part of the State Government Affairs team. Mr. Tyndale served in the role of State Energy Policy Manager, and later Manager of State Government Affairs Operations & Planning. He moved to the Corporate Citizenship & Culture department in October 2018 as Manager of Corporate Responsibility.

Mr. Tyndale is licensed to practice law in the State of New York, the State of New Jersey, and the District of Columbia. He is also a registered patent attorney. Mr. Tyndale’s experiences include grassroots organization, advocacy, and management. He is a graduate of the 2014 Class of Lead New Jersey, and currently serves on the Hudson County Workforce Development Board, the Advisory Board of the New Jersey Chapter of the New Leaders Council (NLC) and as 1st Vice President of the New Jersey Chapter of the American Association of Blacks in Energy (AABE).