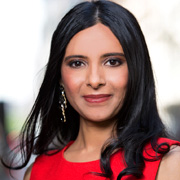 Radha Subramanyam is President of Insights, Research and Data Analytics for iHeartMedia, where she develops and manages an expansive range of data and research efforts involving digital analytics, ratings and measurement, ad sales research, mobile measurement, programming analysis, music research, campaign measurement/attribution and marketing research. She is one of a select group of media and entertainment executives with extensive experience in all areas of industry – television, digital, radio, and social media.

Prior to joining iHeartMedia, Subramanyam held senior executive roles at Yahoo! and MTV Networks and was one of the founding leaders of a new analytics and consulting practice at Nielsen. She began her media career at NBCUniversal after having previously taught media and entertainment courses at Vassar College and New York University. Subramanyam has been widely recognized by the industry and her peers through several awards, including being named one of the Most Influential Women in Radio by Radio Ink in 2013 and 2014. She holds a Ph.D. in Radio, Television and Film from Northwestern University.