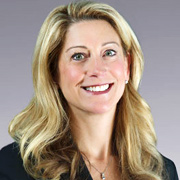 Kelcey Hoyt was named director of Investor Relations for Praxair, Inc. in 2010.

Hoyt joined Praxair in 2002 and held a variety of management positions in corporate accounting before being appointed finance director for the onsite and helium units of Praxair’s North American Industrial Gases business in 2008. She was appointed controller for the eastern division in 2009. Before joining Praxair, she was an audit manager for KPMG and a communications manager at Xerox. Hoyt is a certified public accountant and holds a bachelor’s degree in business administration from Pace University, New York.